What fish can you see while snorkeling in the Galapagos Islands? 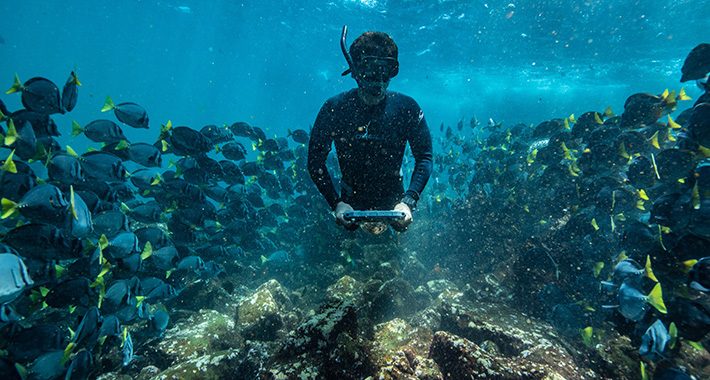 The surrounding Galapagos waters are literally teeming with hundreds of species of marine life. One of the best and easiest ways to view some of these remarkable underwater creatures is by snorkeling. This activity is built into every cruise itinerary. What makes it all the more exciting is that, while visiting different islands and bays, visitors get a chance to interact with all sorts of brilliant fish. Let’s take a look at some of these fascinating inhabitants of this UNESCO Biosphere Reserve. 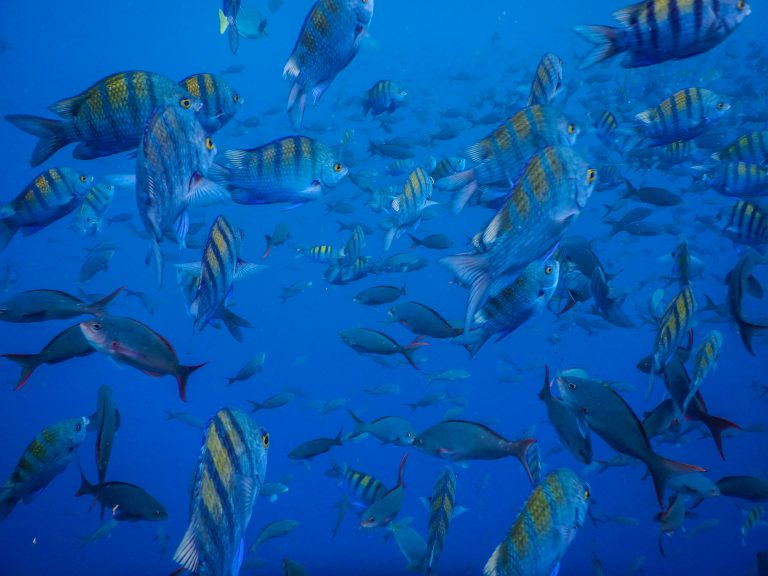 Sergeant-major is found at just about every snorkeling site in the Galapagos Islands.

Sergeant major fish are relatively small, thin, and oval fish. They are easy to spot because of the five distinctive blue-black vertical bars on their sides. In shallower sandy areas and over reefs they appear silvery gray with a tinge of yellow. They school in large cluster groups when feeding. 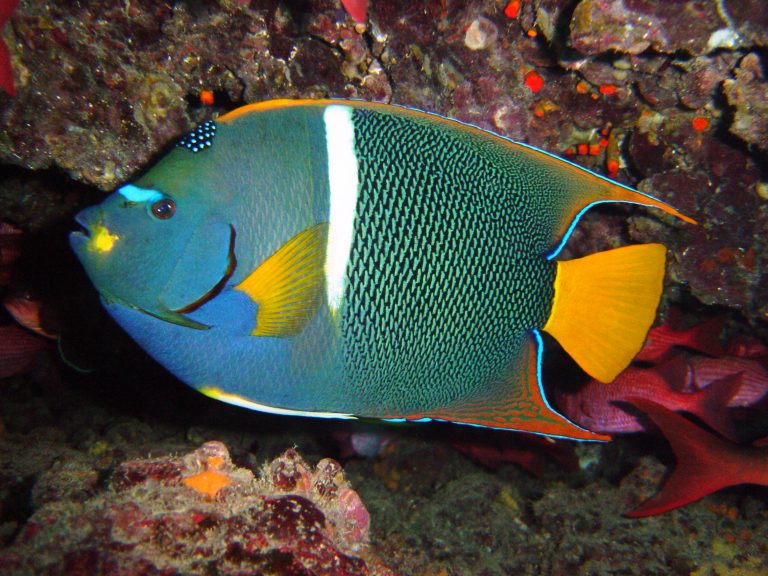 The king angelfish is one of the most common and colorful fish in the Galapagos. (Photo courtesy of Francisco Dousdebés)

Generally, king angelfish grow to almost 14 in (35 cm) in length. The adults have brown or blue bodies depending on the light at the depth in which they’re found. Generally, juveniles undergo many color changes as they mature. 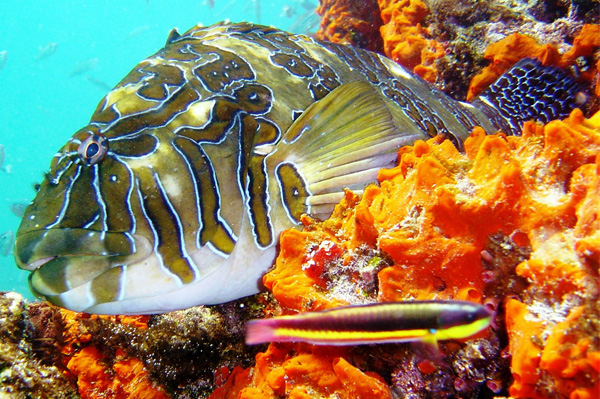 It is the largest of the hawkfish family with maximum size of 24 in (60 cm) in length. A Cortez Rainbow Wrasse features in the foreground. (Photo courtesy of Francisco Dousdebés)

Like the name, patterns across the olive-scaled, medium hawkfish do certainly resemble hieroglyphs. In the Galapagos, these shy, predatory fish feed mostly on smaller fish and Sally Lightfoot crabs while growing to lengths of around 24 inches.

These reef inhabitants commonly congregate in schools. Brightly colored and small, they can sometimes be found to act as cleaner fish, feeding of scraps of algae found in the gills of bigger fish. They are also known to eat smaller fish, shrimp and bristle worms.

With a large dorsal fin that springs up when threatened by bigger fish, the orange side triggerfish wedges itself in crevices so that it can’t be yanked away by larger fish and eaten. 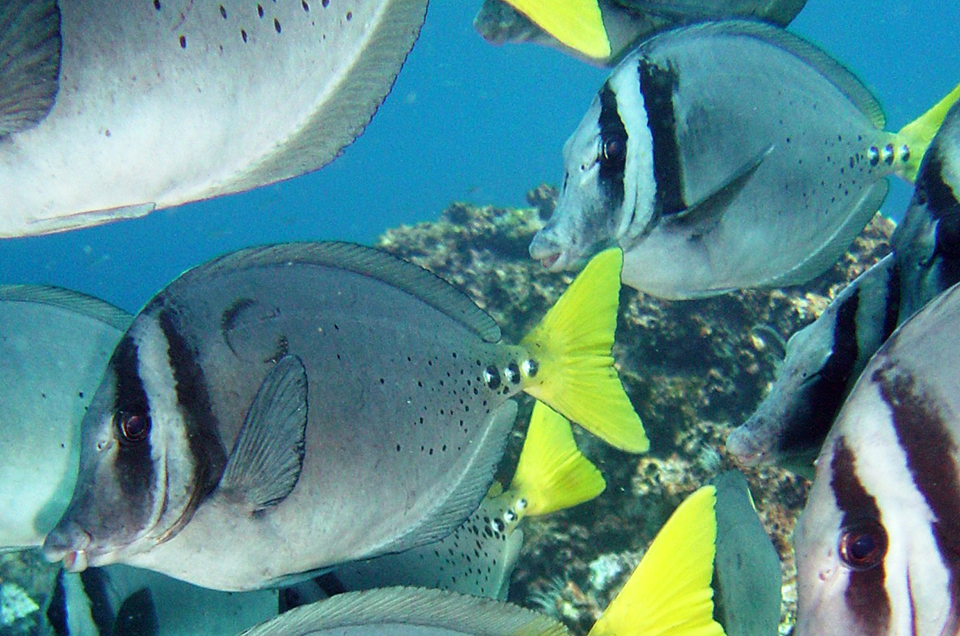 The yellowtail surgeonfish in the Galapagos is distinguished by having far fewer spots than those found in other parts of the Pacific. (Photo courtesy of Francisco Dousdebés) 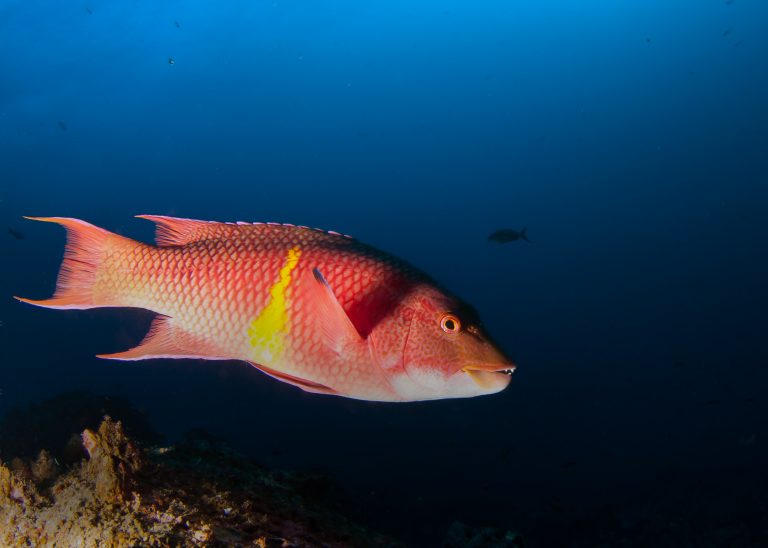 Mexican hogfish begin life as female and transition to male with age.

Having a pointed snout with two pairs of strong canines, the Mexican hogfish is a species of wrasse. They feed easily on crabs, sea urchins, and other shellfish. Interestingly, these sequential hermaphrodites start life female and later transition to males as a way to protect their egg-laying territories, often called leks. 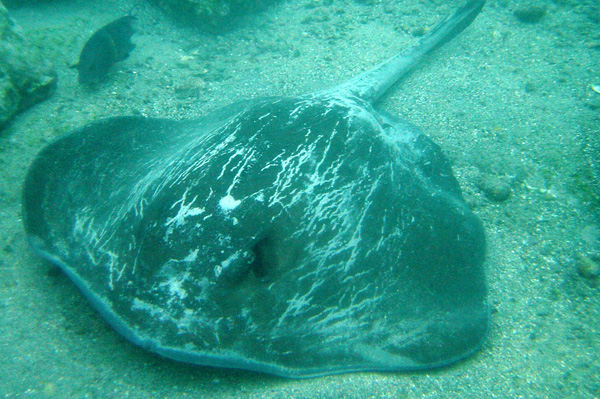 Marble rays are often motionless where you can find them at the reef bottom usually near a vertical structure like caves and ledges. (Photo courtesy of Francisco Dousdebés)

Usually buried amid the sandy ocean floor, the stunning marble ray is hard to spot. However, it does come up occasionally to feed on crustaceans rambling along the bottom of the sea.

As the name implies these Eels have black and white stripping like zebras and are easy to spot when diving or snorkeling. They usually hide in rock crevices and point their heads out at intruders or for a bite to eat. 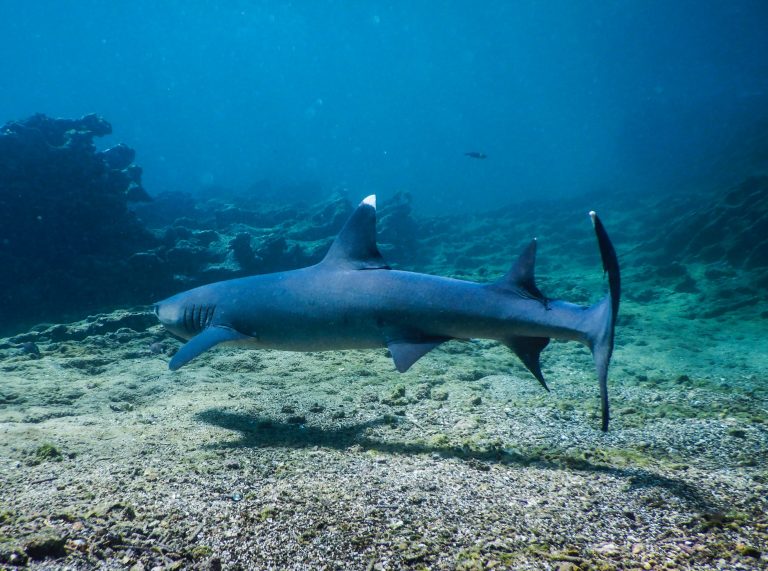 Whitetip reef sharks hang out along the ocean floor.

Quite common in the Galapagos Islands, whitetip reef sharks can be seen swimming freely in small groups or just resting along the ocean floor, amid a number of their cousins, including hammerhead and blacktip sharks, and the curious-looking Port Jackson shark. 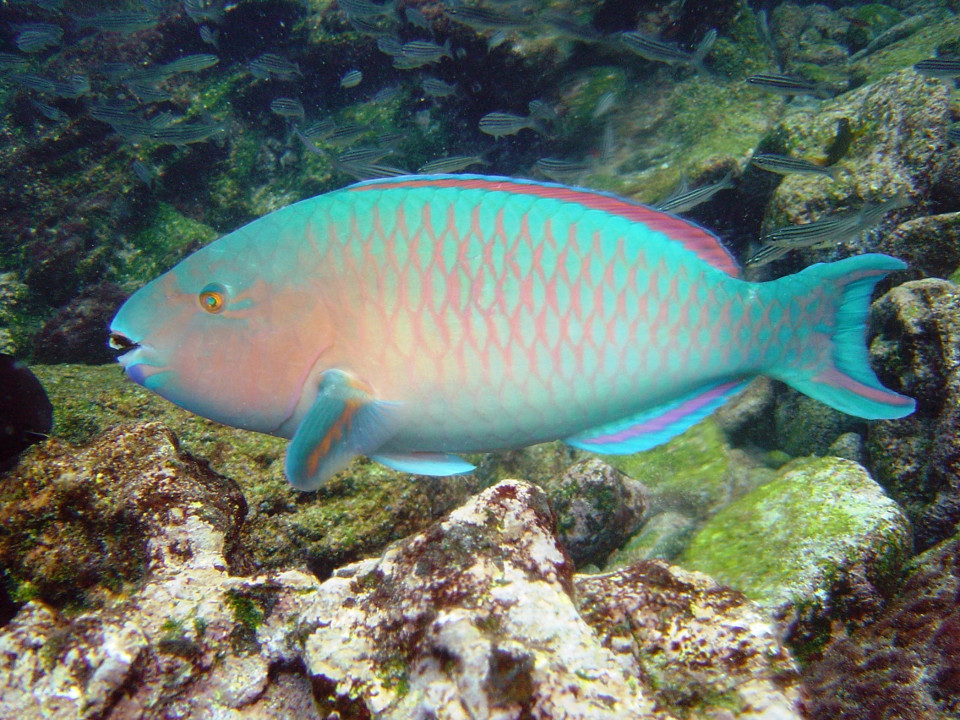 Similar to Mexican hogfish, bluechin parrotfish are sequential hermaphrodites; they start out female and transition to male in the latter stages of life. These coral-eaters can usually be seen hugging the Galapagos coastline, crowding the islands’ various reefs. 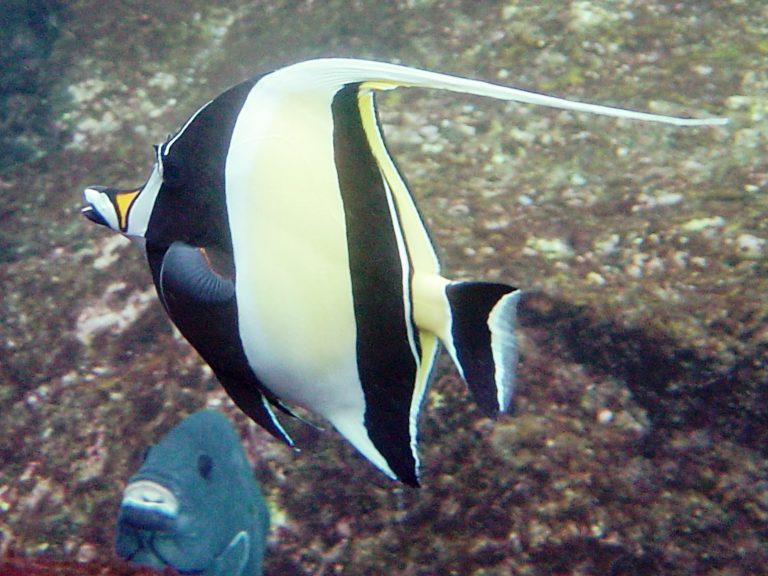 The Moorish idol is believed to be a harbinger of happiness. (photo courtesy of Francisco Dousdebés)

One of the most distinctive fish you’ll see while snorkeling in the Galapagos Islands, the Moorish idol is believed to be a harbinger of happiness. These fish tend to eat coral and sponges. They are easy to spot thanks to the elegant black, yellow, and white bands that vertically grace their bodies, along with their short and pronounced snouts.

Growing to a length of about 12 in (30 cm), Pacific seahorses are elusive and serene creatures are hard to find, hiding amid the brown algae and black coral rocks. Female seahorses usually deposit their eggs into the male pouches where they are fertilized until they eventually hatch. 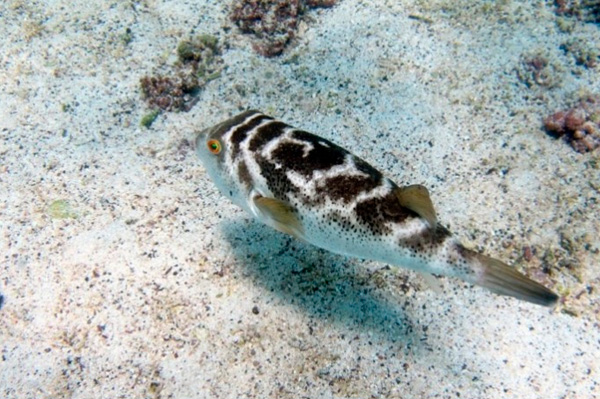 Concentric pufferfish use their highly elastic stomachs and the ability to quickly ingest huge amounts of water (and even air when necessary) to turn themselves virtually inedible.

Concentric pufferfish are distinguishable by the broad white stripes along their otherwise dark brown backs. When cruising in a boat, one can often look over the side and spot these gentle swimmers gliding along just below the surface of the water. However, if you’re a predator, beware! As their name implies, these fish can puff up to ward off would-be conquerors. Their hard, toxic spines make them hard to swallow and generally avoided. 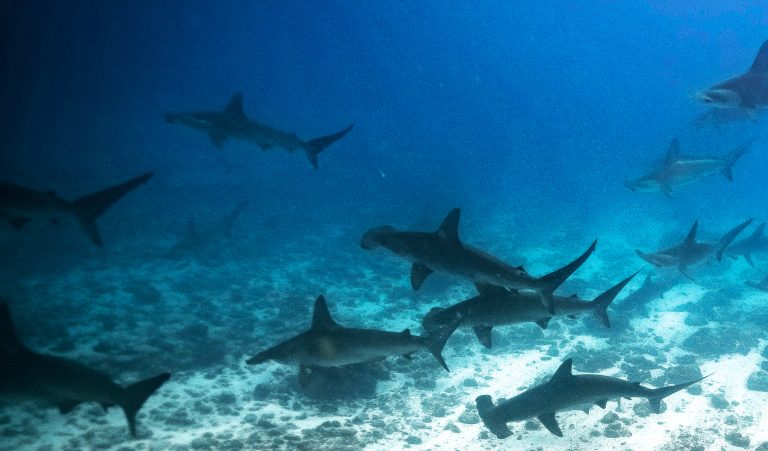 The scalloped hammerhead shark boasts a single eye and a single nostril at each end of its head.

These strange-looking marvels of nature have rectangular heads with a single eye and one nostril at each end. The scalloped hammerhead shark is quite an attraction for many snorkelers and divers. They are abundant in the waters of the Galapagos Islands. 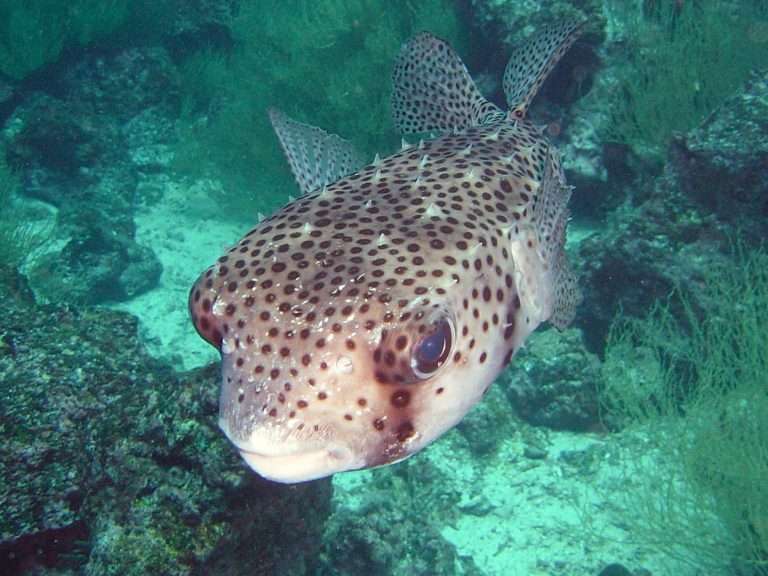 Pacific burrfish are normally found at depths of up to 80 ft (25 m). (Photo courtesy of Francisco Dousdebés)

Pacific burrfish have a stunning appearance thanks to their stocky, round heads, wide mouths, and large protruding eyes. Their bodies are covered in hundreds of spots and feature small, angular protrusions. They normally feed on hard shelled invertebrates (crustaceans). And average about 22 in (50 cm) in length.