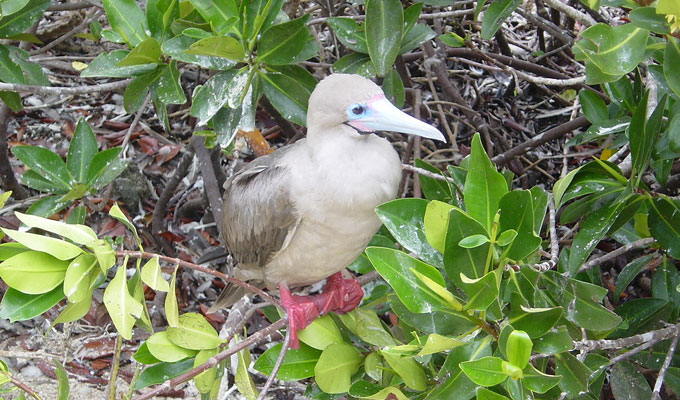 Galapagos Red-footed boobies, with their bright red feet and brilliant blue beaks, are rather peculiar looking birds. However, more peculiar still is the fact that a bird with webbed feet nests in trees and shrubs. Crows, eagles, sparrows and the vast majority of birds that spend significant amounts of time in trees have strong digits that allow them to cling to the branches. Yet, such oddities are not unusual in the Galapagos Islands, where birds have lost their ability to fly and iguanas swim in the sea.

Red-footed boobies are extremely easy to recognize, thanks to the unique and uniform color of their beak (blue) and feet (red) across all individuals; however, in sharp contrast to this, these boobies are one of the most polymorphic seabirds in the world, making it very difficult to differentiate them based on the color of their plumage. Three specific types of plumage are formally recognized among red-footed boobies (brown, white and white-tailed brown), but each of these categories includes a wide range of shades. Of the birds in the Galapagos Islands, only the white-tailed brown and the brown types may be found. Interestingly, despite the numerous studies that have been conducted, experts are still unsure of why the Galapagos red-footed boobies display such an extensive range of plumages and how this may benefit the population (ex. sexual selection, speciation, etc.). 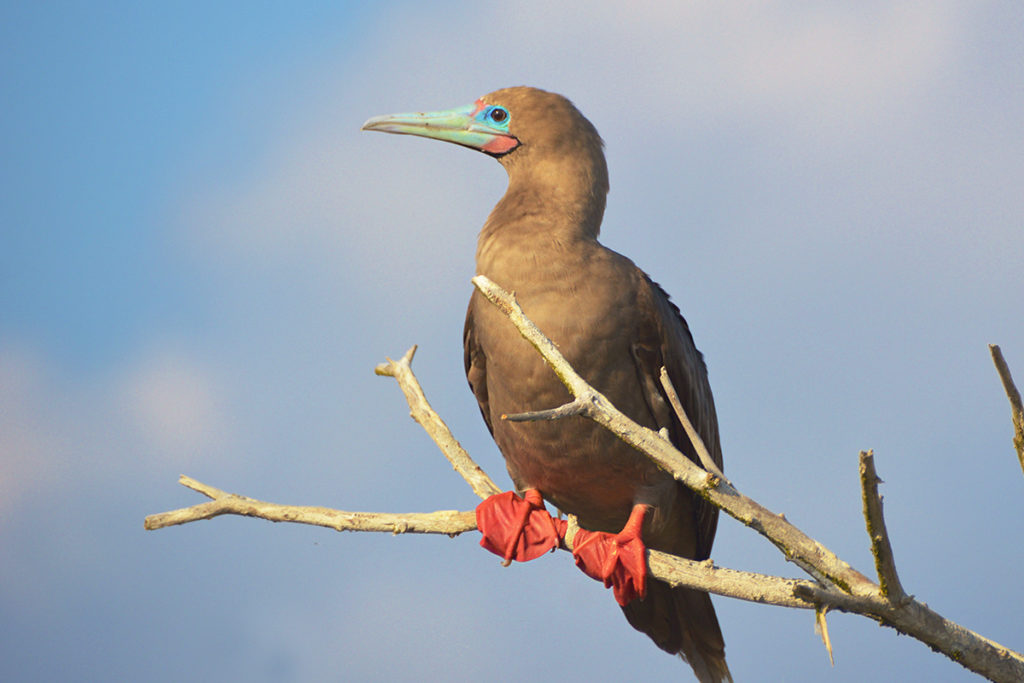 Where to find red feet in the Galapagos

The largest colony of Galapagos red-footed boobies in the world is on Genovesa Island, making it by far the best location to observe this bird on land. Nevertheless, the red-footed booby is a marine bird and spends the majority of time at sea. As you begin to approach Genovesa Island, keep an eye out for its red feet flying through the air or perched on the railings of a ship, for at sea is by far the best place to appreciate this bird’s skills. While they have a rather clownish appearance on land, red-footed boobies are excellent divers and fishermen. As they plummet through the air, their blue faces and clumsy red shoes blur into an image of power and grace, even agile enough to snatch fish as they jump into the air. On the other hand, slicing through the water they can dive up to 30 meters to catch their prey. To aid their swimming, they are capable of closing their nostrils to prevent water from entering their respiratory tract. 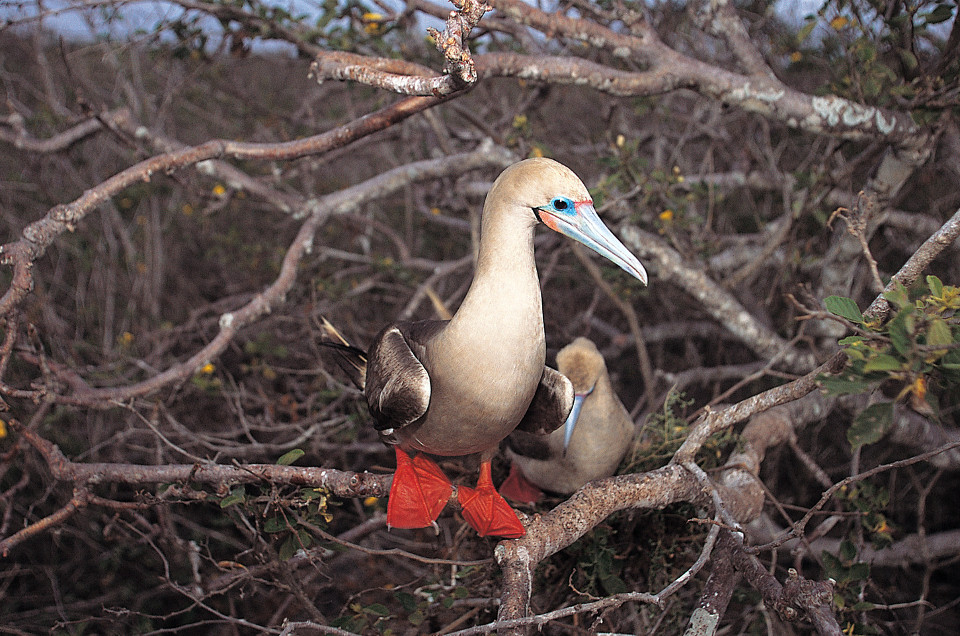 Galapagos Red-footed boobies are also effective distance flyers and are described as a pelagic bird (from the Greek word pelagos meaning ocean-going), traveling as far as 93 miles when fishing. However, despite their strength, it is difficult for them to get into the air. Red-foots heavily depend on the wind to take off and, without it, they are extremely clumsy, half-running half-flying until they get enough speed to take off. When taking off from the sea, they thrust their feet against the weight of the water and jump into the wind.

It is not uncommon to see red-footed boobies soaring over the sea in large groups, as they are very gregarious birds. Together they glide along the surface, searching out their prey. Interestingly, they also feed with other predators, such as dolphins. As the dolphins herd the fish into shoals, the boobies quickly snatch up their prey.

Red-footed boobies breed approximately every 15 months making it difficult to know when breeding seasons will fall; however, if you are lucky enough to visit the islands during such a season, you will be treated with either remarkable dances or hundreds of white fluffy balls waddling around.

Similar to other species of boobies, the mating season starts with extravagant and highly ritualized greeting dances. The dance centers around a procedure known as sky pointing in which the males show off their beautiful blue throats by throwing back their head towards the sky. This dance also includes an awkward strut in which the birds show off their bright blue feet, waving them around in the air to display the bright red color. Red-footed boobies often stay with the same partners for several seasons in a row and perform these rituals around the nest. Unlike any other species of booby bird, red-foots build their nests in small trees and shrubs, and so this dance becomes quite a remarkable balancing act.

Once the chick hatches, it is cared for by both of the parents and, unlike other species of booby, the red-footed birds only have one chick, making the harrowing practice of siblicide known among booby populations irrelevant. The babies do not fledge until they are three months old and will not be able to go on long trips until they are five months old.