Home » Galapagos Tips & Information » Great and Magnificent Frigatebirds and Their Chicks: It's All in the Family
Galapagos Wildlife | < 1 MIN READ

Great and Magnificent Frigatebirds and Their Chicks: It’s All in the Family 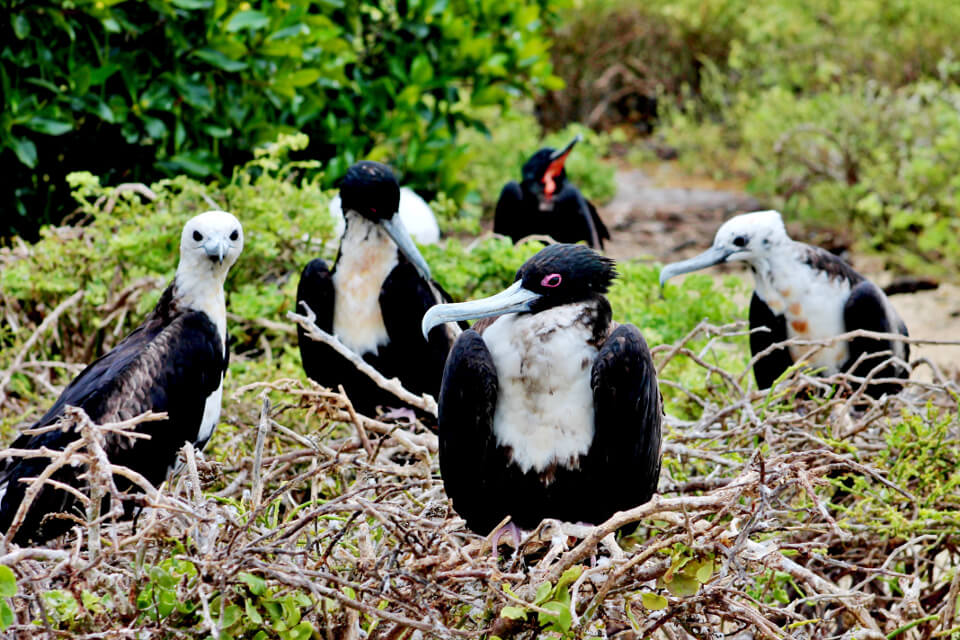 Huge and majestic, frigatebirds in the Galapagos are often seen passively dominating the skies, hovering in the gentle carriage of a strong breeze as they survey the world below them. Their huge wings and jet-black color often make them seem rather ominous, but these gentle giants are actually the most endearing of parents when it comes to their chicks. Given their frequency of being in the air so often, getting a chance to see these giant birds down on the ground with their tiny chicks is actually a pretty special sight to behold in the Galapagos.

Frigatebirds tend to be seasonally monogamous, as breeding and raising chicks in the Galapagos tends to be a year-long effort. They often nest in bushes or up in trees and can form colonies of up to several hundred sometimes even thousands of pairs that live in close proximity to one another.

Nest-building is a project that is shared between the two partners and can sometimes take anywhere between a few days to a couple of weeks to finish. Males collect material for the nest that typically consists of twigs and vines nearby.

One egg is laid throughout the whole breeding season, but the bond that the mother and father share can be broken if the egg breaks. Should this occur, females tend to acquire a new mate and attempt to lay another egg that same year. Should the egg survive, both parents will take turns incubating the egg every 3 to 6 days. 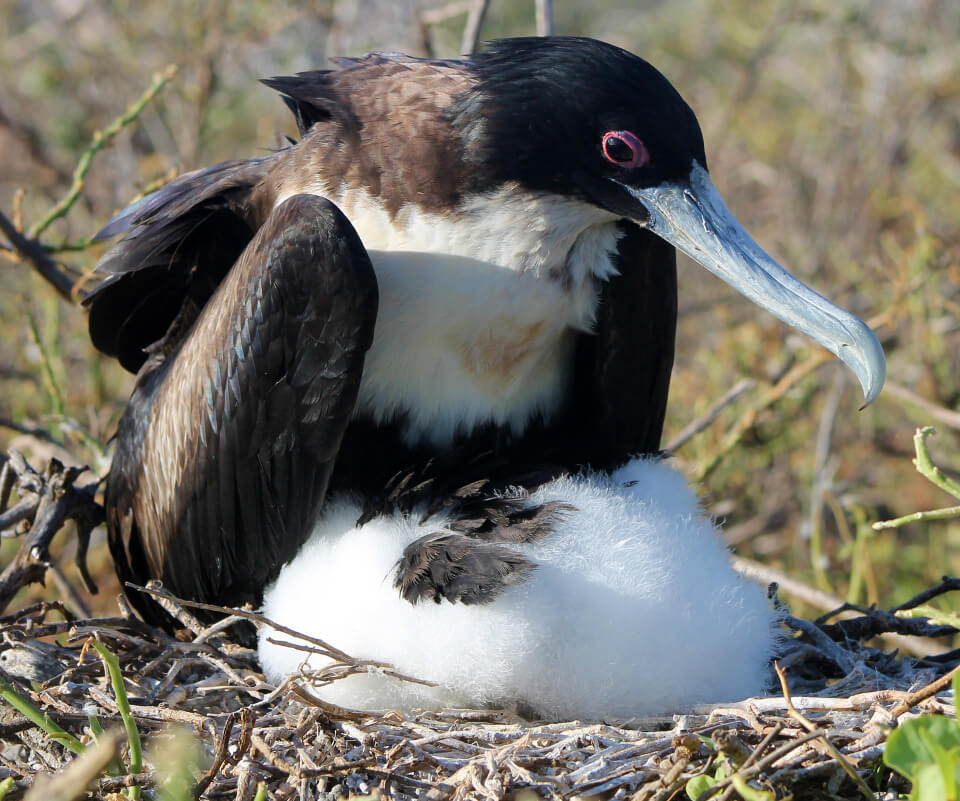 Frigatebird Chicks in Galapagos: Welcome to the Family!

After a period of about 55 days, the incubation period will end. Frigatebirds chicks are born without any feathers to keep them warm, so they end up being brooded for about two weeks, at which point they will have grown their white down. They are feed at numerous points throughout the day, but once they get older, they will only be fed every one or two days. 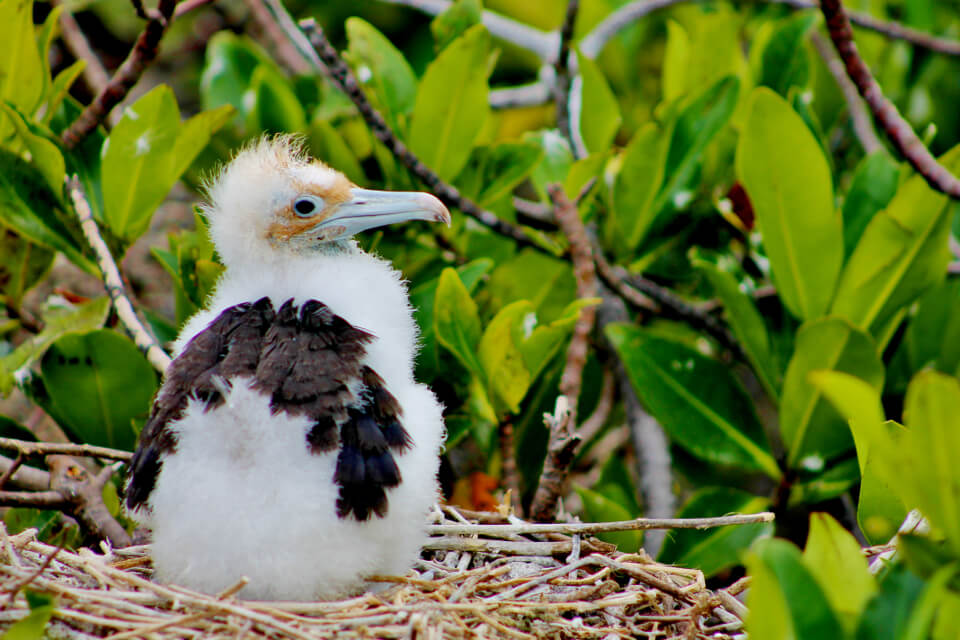 It takes about 50 days for the chick to hatch.

Chicks will be taken care of by their parents for a period that can last anywhere between half to one and a half years. Fun fact: Frigatebirds have the longest period of post-fledgling care of any bird. These won’t reach sexual maturity until the age of 10 or 11 (males) or 8 or 9 (females) when they have finally acquired the full adult plumage.

They also engage in play! Their games typically involve numerous chicks chasing one chick that has a stick. After dropping the stick, the chaser(s) must try and catch the stick before it falls into the water. Should it strike the water, the game starts all over again. It is believed that they use this form of play to sharpen their fishing skills.

Great frigatebirds, which are also part of our BIG15 group of iconic species in Galapagos, commonly go for flying fish as their main form of food. They are even more notorious for their taking seabird chicks as their source of food, often going to breeding colonies to pick out the vulnerable individuals. All prey tends to be caught and snatched mid-flight, as these birds are quite averse to water. 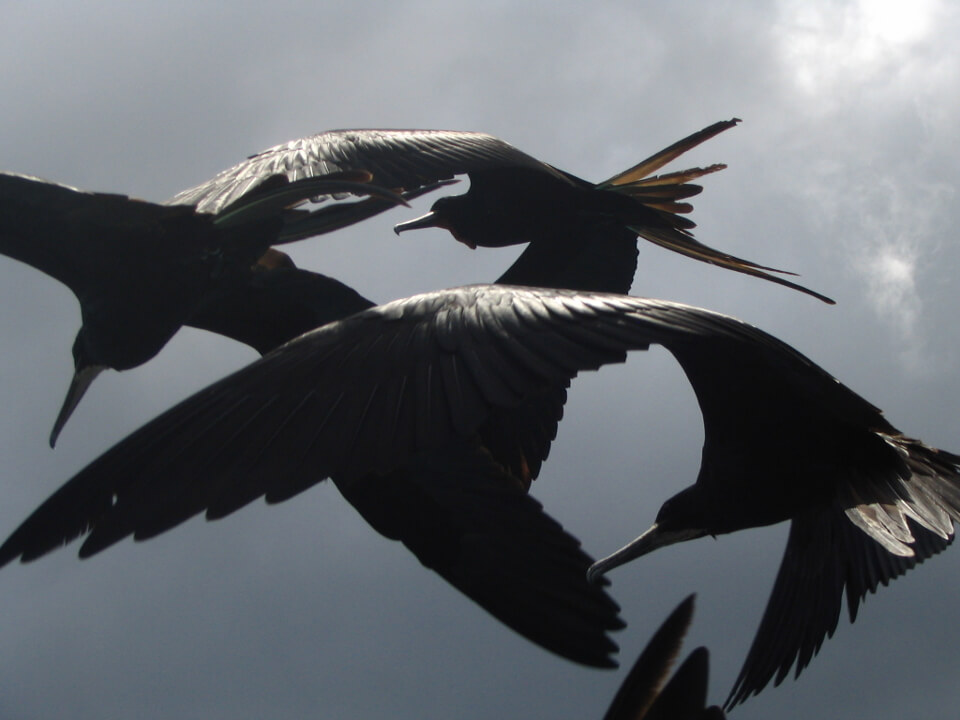