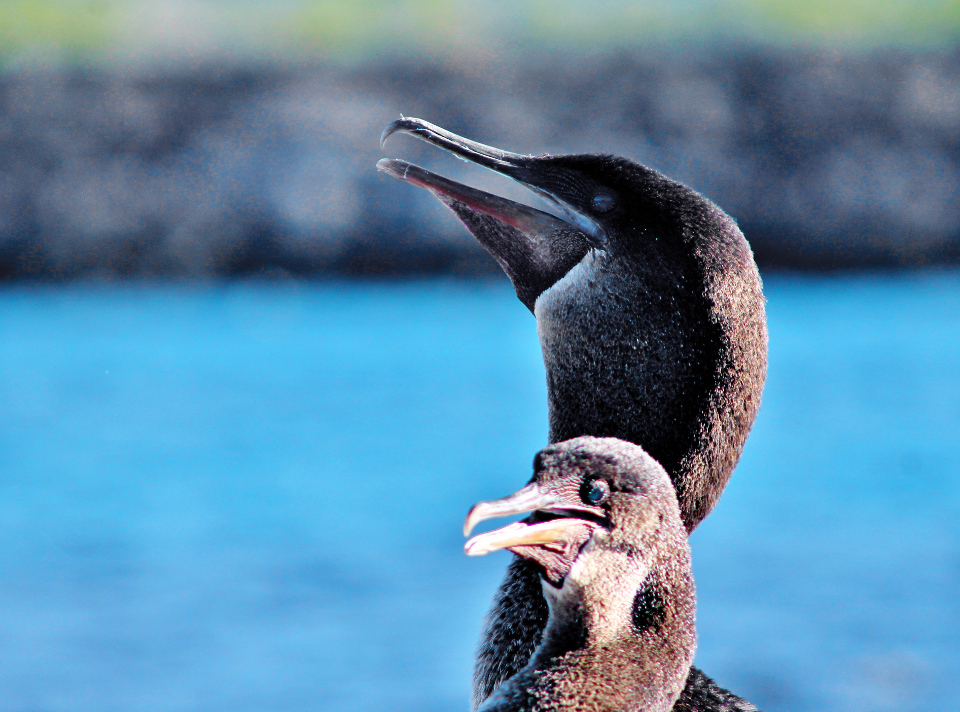 A peculiar pair of wings flap frantically into the air without giving any signs of flight, shedding golden drops of water up into the deep blue sky that covers a setting sun. The Flightless Cormorant – an endemic species of the Galapagos whose only homes in the entire world are Fernandina and the western coast of Isabela – is one of the more remarkable evolutionary sights that visitors get to behold when they visit the enchanted isles. Their vestigial wings are but a visual echo of what once served a more airborne purpose and their progeny are but a continuation of that same echo. In order to perpetuate their unique species, the flightless cormorant undergoes a rather intricate series of steps and rituals that add to its captivating mystique.

The majority of the courting process between males and females begins in the water, with both birds curling their necks into a more flattened “s-like” position as they weave alongside each other. Once the gambit has been approved the pair move onto land, where they begin to make their nest (out of seaweed and any other pieces of debris they can find) as a team and not all that far from the shoreline. It’s not uncommon to see the male bring little “gifts” to the female that are then added to the seaweed nest. These gifts can range anywhere from bottle caps to pieces of driftwood.

Nesting patterns between both individuals usually starts to occur between April and October, thanks in large part to sea surface temperatures being at their coldest and bringing in a bounty of marine food. Colder temperatures on land also help decrease the risk of heat stress on the baby chicks.

Females end up laying an average of three eggs per clutch. While both male and female share the incubation period in equal parts, it’s pretty common to only see one egg end up hatching at the end of said period. It takes an average of 70 days before the chick is able to become fully independent, but between this period both male and female parents share the task of feeding and protecting the chicks from exposure and predation. Interesting to note is that the female will desert their chick if food is plentiful enough and leave all the parenting to the male. This allows her to go off and recouple with another male and have another clutch. While it’s possible for a female to have several broods within a single season, it’s a pretty rare sight given there rarely tends to be an overabundance of food to allow for such a phenomenon. The average life span for both sexes is approximately 13 years, with an annual survival rate of 90%.

Having lost a substantial number of their population back during the El Niño phenomenon in 1983, which cut their population in half and reduced it to just 400 individuals, these reproductive patterns are paramount when it comes to the conservation of this unique species. In fact, it’s the only thing that’s necessary to maintain a stable population.

Flightless cormorant can be found just in two islands; Fernandina, and the northern and western coasts of Isabela.

These beautifully peculiar creatures can be viewed and marveled at during our Western Islands itinerary aboard Yacht La Pinta, forming part of our Galapagos BIG15 group of iconic species that we highly recommend all our visitors make it a point to try and see!