Beautiful Giants – Whales in the Galapagos

Whales in the Galapagos

Whale sightings in the Galapagos Islands depend on an interesting correlation between the return of the southeast trade winds, the availability of food caused by upwellings, and the migration patterns of cetaceans.  When these three variables interact, the Galapagos islands become the perfect place for whale-watching.  And it’s a fascinating experience that can be enjoyed from the comfort of an expedition vessel, from land or, more incredibly so, from the dinghy’s that are used for coastal explorations and landings. Nothing beats seeing the spouts of a dozen whales from a few feet away (or maybe just inches away, sometimes!).  From June to November, the southeast trade winds blow strong along the lower and mid-coast of western South America (this includes Chile, Peru, and Ecuador). When they’re close to tropical latitudes, these winds end up moving giant masses of water from east to west. Taking advantage of said movement patterns, humpback whales use these water currents to escape the cold southern Antarctica winter. After females give birth, they take their offspring to tropical waters that are generally not very nutrient-rich, except for areas that experience upwelling (such as the Galapagos), where productivity remains high. These milk-hungry calves frolic in equatorial waters, and the vast ocean currents take them in all directions, including the Galapagos Islands. 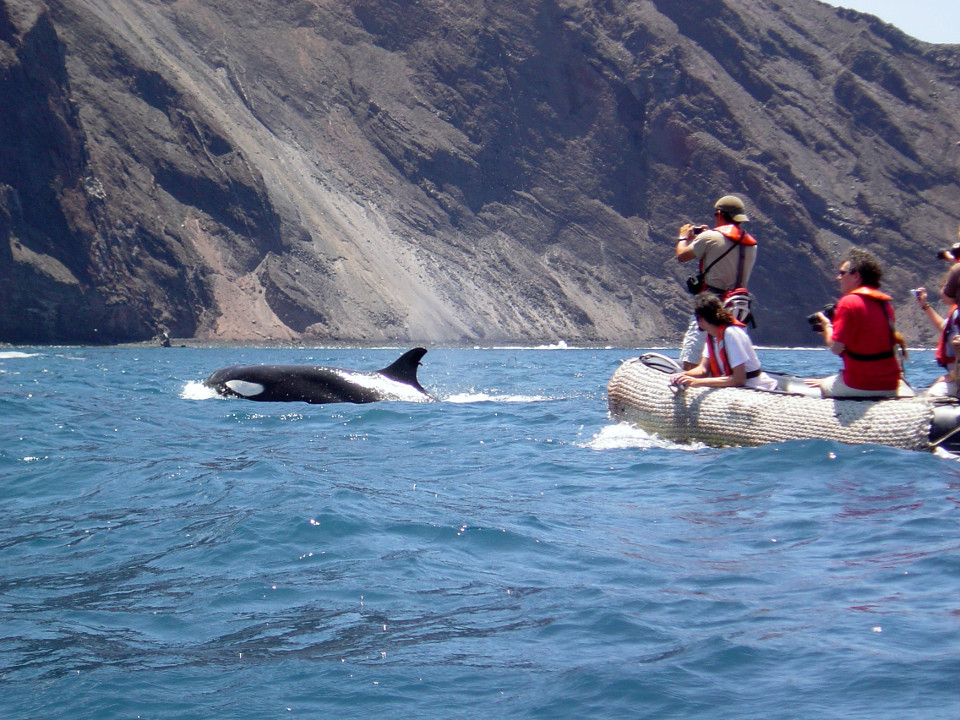 When can I see whales in the Galapagos?

There is no one time of the year to see whales, nor time where none are seen. It’s usually a matter of luck, but there is a slightly higher chance of whale sightings during the dry season. Chances also increase throughout the western islands of Isabela and Fernandina along the Bolivar Channel – a popular location to observe cetaceans.

Yacht La Pinta has spotted several whales while on expeditions! Are you ready to see them yourself?

June to November migration pattern is only followed by species that escape the cold southern winter, but it can also work in reverse for cetaceans that migrate away from the northern winter. They travel down south and end up in the Galapagos Islands, where winds, currents, and various forms of nourishment end up converging. Although this second migration pattern isn’t as prominent as the first one, it brings forth sperm whales, tropical whales, and other species. One last recommendation: keeping an eye on the horizon dramatically increases the chances of spotting a beautiful cetacean! In the meantime, let’s just keep our fingers crossed.

Every journey to the archipelago comes packed with numerous and spectacular wildlife viewing opportunities. The Galapagos truly is a magical place, thanks in large part to the diverse wildlife that’s around each corner, all throughout the year! And if it’s the bigger animals that you are interested in, then read on, hop in one of the best archipelago’s expedition vessels, and get ready to be seriously impressed by some amazing whales in the Galapagos!

Cetaceans belong to the order Cetacea, which are mammals that are fully adapted to aquatic life.  This order includes dolphins and whales that are distributed all over the planet. They live in locations with extreme conditions that range from ice-cold waters to tannin-rich tropical rivers. For years, cetaceans have created a sense of fascination in humans due to their wondrous swimming abilities, as well as their stunning evolutionary adaptations. Sadly, some species have been severely affected by human-related activities such as hunting due to the economic value of oil chemicals that are found within their blubber tissue. This kind of marine hunting is called whaling, and it’s one of the main causes of the diminishing number of species around the world. 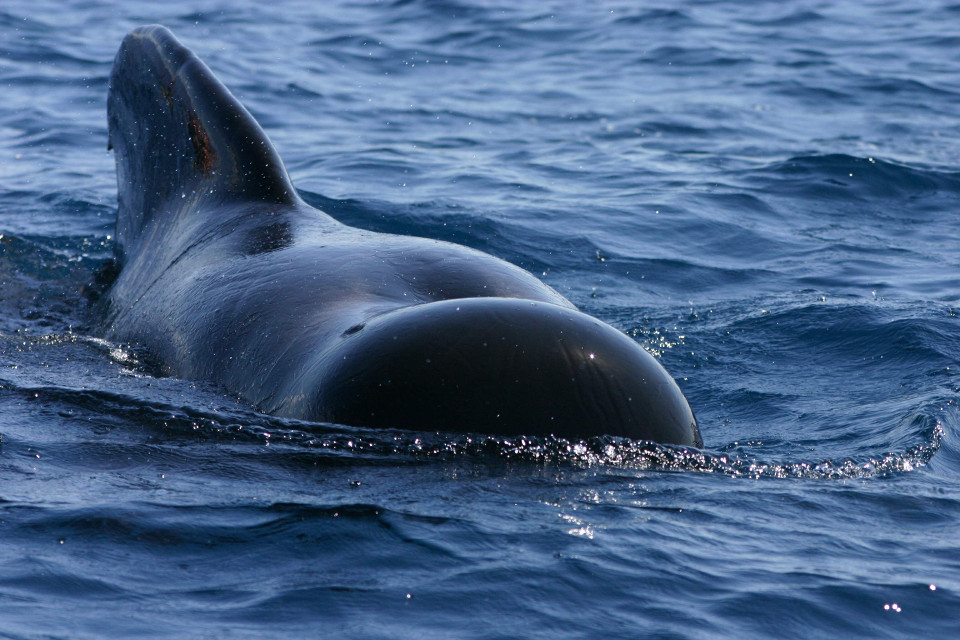 Fortunately for cetaceans, whale oil was no longer economically viable when petrol was discovered. As a result, the whale population slowly started to rise; and while they are still an endangered species, whale sightings are very common. There are places in the world where whale-watching has become a very profitable business and the enjoyment of these unique experiences is closely connected to the protection of these marine leviathans. Some of the most coveted whale-watching destinations include Alaska, Sea of Cortez, Dominican Republic, Antarctica, Vancouver, Seattle, New Zealand, Australia, Peru, and Ecuador, among others. Lately, the Galapagos Islands have reported more frequent sightings of cetaceans. During whale migration season they often become so common that, on certain mornings (during the normal routes taken between islands), it’s not unusual for there to be unique encounters with many of such marine creatures. Some fascinating sightings of orca whales have also increased the number of wows! with our group of guests. 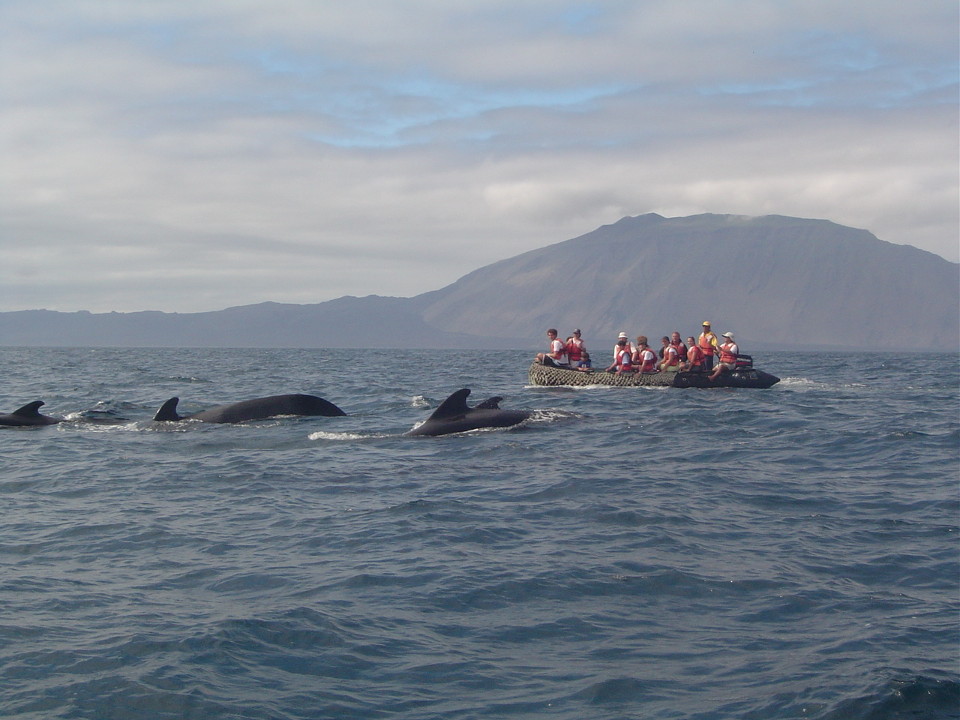 Whale watching in the Galapagos is a year-round activity, though the cooler months (July through November) are generally considered the best time