AS HOT AS IT GETS! Hot Season has officially kicked off in the Galapagos Islands 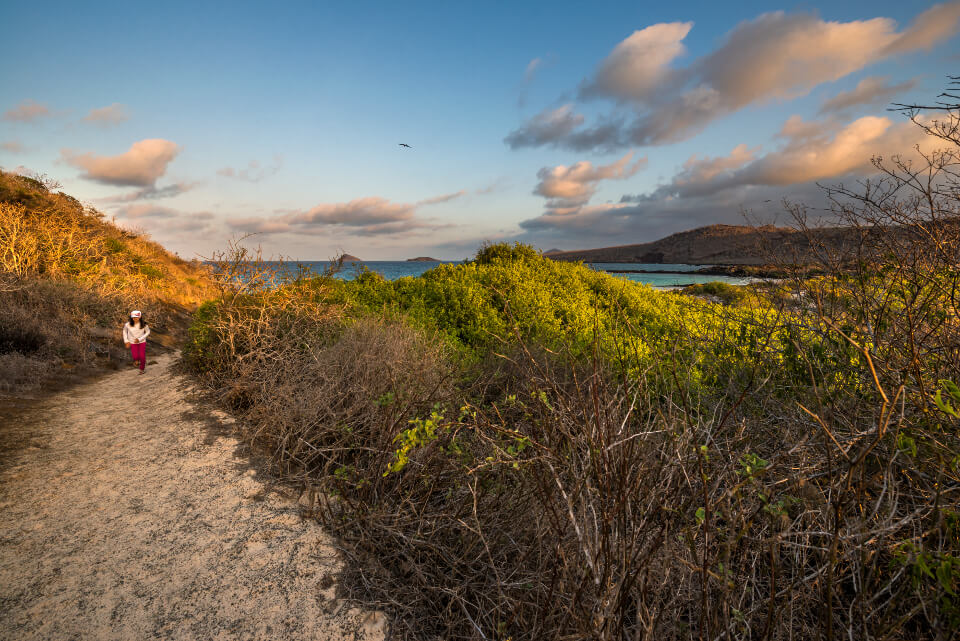 A few weeks ago we shared some details regarding the very beginning of the hot season in Galapagos. Now, as we reach the first half of January, we have witnessed a noticeable decrease in the strength of the southeast trade winds that have been coming in from South America.

Consequently, the movement of the cooler, south equatorial current has ceased within the tropics, giving way to the gradual arrival of tropical balmy waters that had formerly been sitting right beside Central America for quite some time.

As a result of these changes, the “oceanographic equator” now sits closer to Latitude 0°0’00”.  Whenever we see this, we can technically say that the islands have entered their tropical stage or season. From here on out, the islands will experience a gradual increase in humidity, water temperature, and super clear days.

There are two seasons in the Galapagos islands: Hot season and Dry season

Start planning your visit to the Galapagos Islands for this hot season!

Tropical “true tropical waters” hover around 26 °C (79 °F). These are the waters that steadily head south towards southern latitudes. Some of these tropical temperatures will even make it as far south as the coast of Peru. Consequently, the Galapagos Islands will face a dramatic and rapid change in terms of how it looks. You could visit the same location, and in a matter of just 14 days, it’ll go from arid to humid, filled by the green lushness. Wildlife, quite naturally, adapts and reacts to these conditions.

It’s quite a sight, especially when you consider the fact that tropical lands birds (such as finches, mockingbirds, warblers, flycatchers, doves, etc.) have all been enduring a non-tropical for a series of months. The arrival of the hot season provides not only relief to these populations, but also provides them with the right conditions for the reproduction of their species. This is the fabric of natural selection at work! When it comes to adjusting its natural history to the hot season in Galapagos, perhaps one of the most interesting species is the Marine Iguana (a member of our BIG15 group of iconic species).  These reptiles synchronize their needs to the first sign of hot days by establishing territories. By mid/late January, females are already laying eggs in places like Punta Espinoza on Fernandina Island. This is located on the far western side of the archipelago. 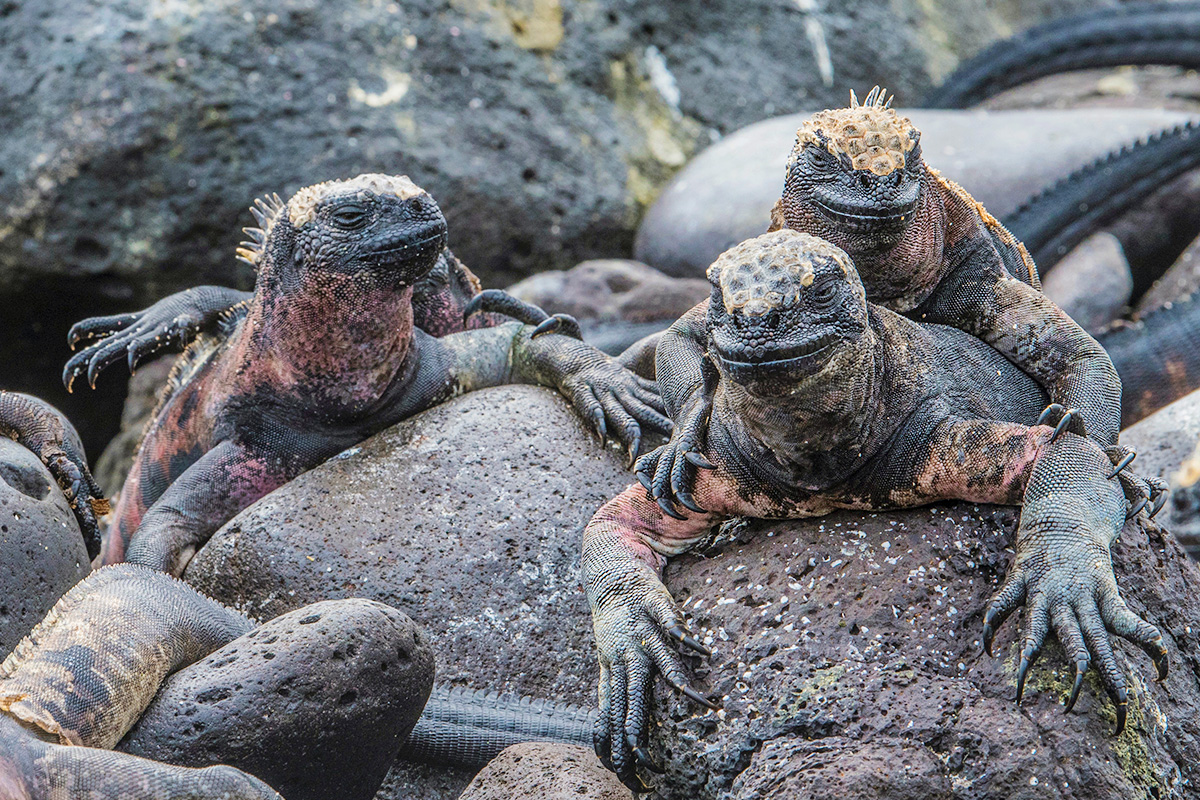 The marine iguanas are an endemic species of the Galapagos islands

Vegetation has now sprouted in vast amounts, providing nesting material and habitats for land birds. This means that there’s also food for land reptiles such as land iguanas, lava lizards, and giant tortoises. Underwater, things have quieted down somewhat for the sea-dependent land species. On land, however, everything has become a world full of action and commotion. Explorers coming to the islands during the months of January, February, March, April, and early May (Hot Season) will find themselves lucky enough to see these all these changes, as they only happen during this half of the year. One of my personal favorites to see are the vibrant yellow and orange colors of land iguanas as they contrast against the emerald green of the vegetation. It’s quite a stunning sight! 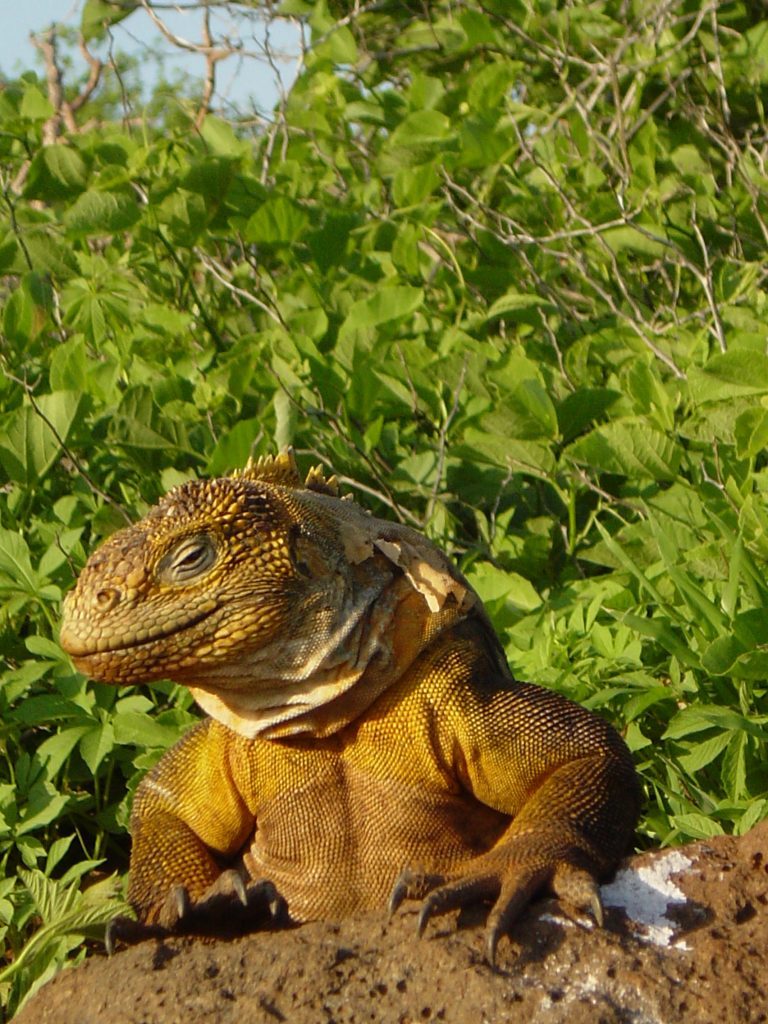 Land iguanas feed mainly on plants (mostly cacti and other succulent plants, so they can survive long periods of time without the need to drink water

Explorers who love aquatic activities will be spending quite some time in the water, as the balmy temperatures will allow for greater chances of having unique encounters with the underwater life. Tropical fish species will be busy feeding, as the warmer temps help promote the growth of reef-forming corals. Parrotfish are delightful to see, as guests will often see them biting out chunks of coral the same we take bites of an apple. You can even hear the crunching/munching sounds underwater too if you get close enough! Because warmer waters carry less plankton, visibility tends to be amazing during these days. Most places will average 15m (40-50ft) of visibility, if not higher. 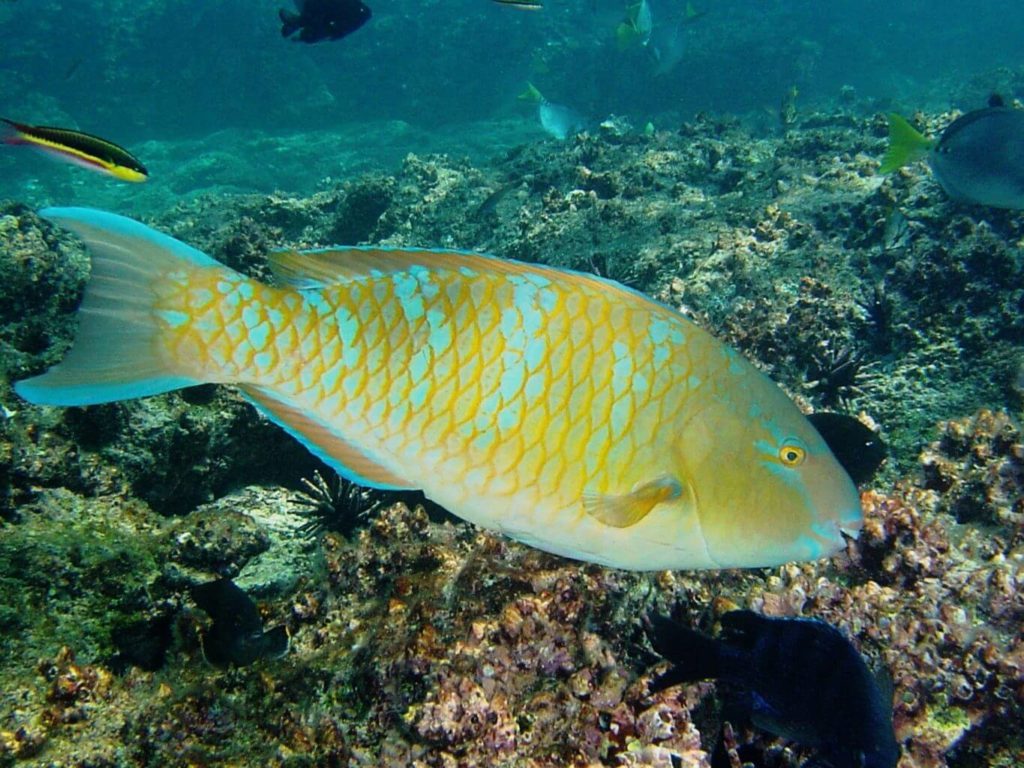 Expedition itineraries need to showcase the outstanding and ever-changing features of these islands. Make sure your choice includes variety, good exposure to the BIG15 group of iconic species, and good geographic coverage in order to witness the spectacular diversity of landscapes and wildlife as the hot season begins to kick in in full force! Viva La Hot Season!