Where does the Galapagos Fur Seal Hide? 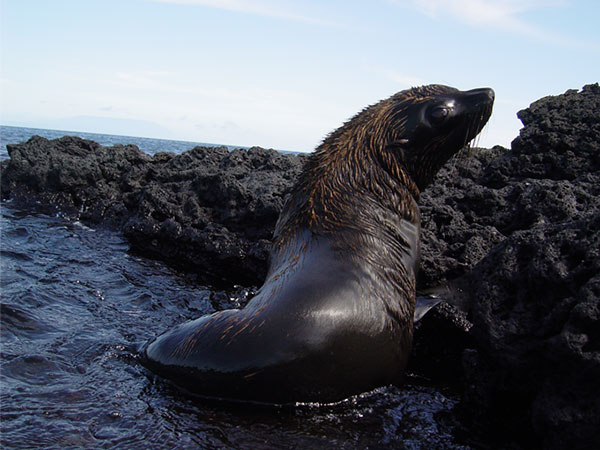 Overshadowed by the numerous sea lions lying on benches, across paths and seemingly anywhere the sun touches, the Galapagos fur seal often receives very little attention from visitors to the Galapagos. However, the numbers of the two populations are surprisingly quite similar – the difference is that while the sea lion prefers sunny beaches, the fur seal sticks to rocky, shady coastlines (largely on Isabela and Fernandina islands) where tourists are less likely to visit. This difference is due to the signature distinction between the two strikingly related species: their coats.

Bearing the equatorial heat in a winter coat

The fur seal can be most easily distinguished from the sea lion by its thick coat. This coat is further enhanced by long guard hairs, giving it rather a fuzzy appearance. However, a thick coat is better suited to cold Chicago winters than the equator, and so the seal has developed various behavioral and physical adaptions to cope. Mother fur seals teach their young to thermoregulate their body so that their internal body temperature does not exceed 37.7 °C. It is because of this that they are often seen wading in tidal pools or sprawled in the shade of cliffs and rocks (hence away from tourist beaches). Additionally, the Galapagos fur seal is relatively small and is able to sweat, both of which are characteristics that allow them to release heat more efficiently than the sea lion.

Can you spot the difference?

In addition to the coats of the two animals, there are several other tips for differentiating between the two (and impress your naturalist!). Its fuzzy fur, in addition to its button nose, more visible ears and large black eyes make it look surprisingly like a small bear swimming around in the turquoise waters. On the other hand, the nose of the sea lion is much pointier and its overall size is quite a bit larger. Do not worry if you are still doubtful, however; as the fur seal is a pinniped, it is closely related to the sea lion and it can be quite difficult to differentiate between them. 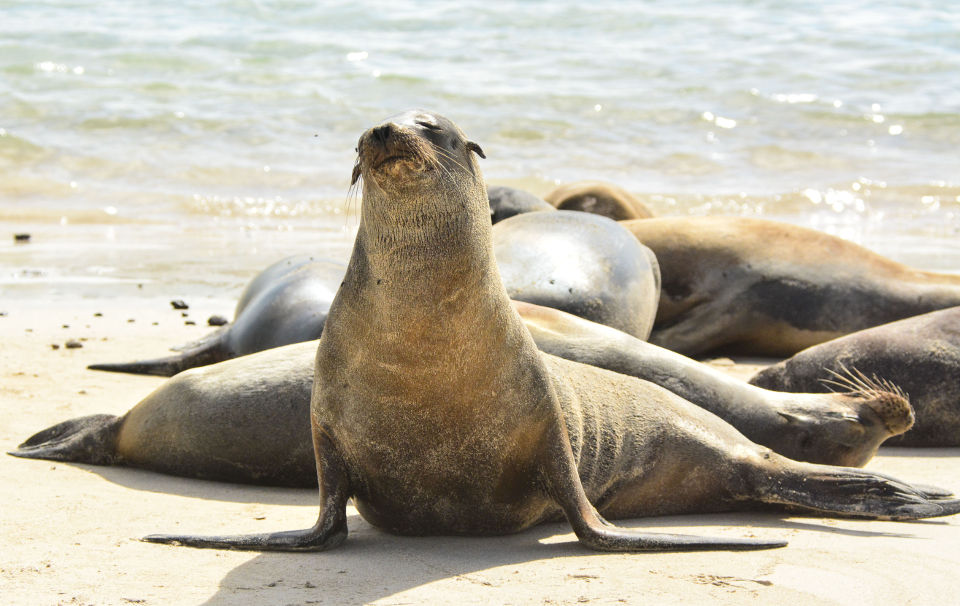 Do not be tricked by their cute face, however; while they are completely harmless towards humans, Galapagos fur seals are extremely territorial. Each male typically governs an area of up to 100 to 200 square meters, which will contain anywhere from six to sixteen females. As other males often wander into territories, they must keep their guard to dutifully protect their women, only abandoning their task at the last possible moment to hunt. Somewhere around 30% of male fur seals die every year in territorial fights. 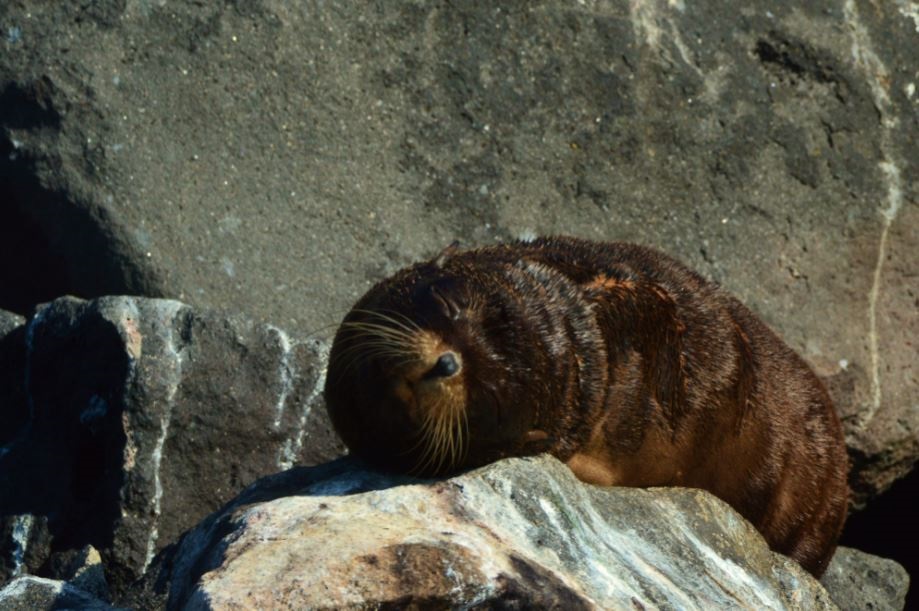 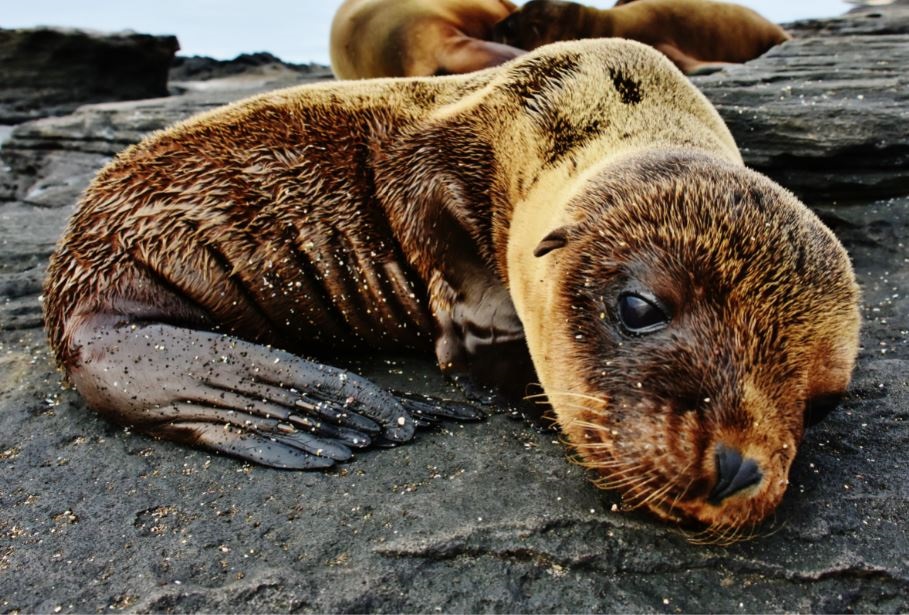 Although fur seals have been well studied, like everything in the Galapagos fur seals still hold a secret or two. The nursing period of the Galapagos fur seal mother is the longest of all fur seals and has been recorded to last up to three years (although it typically ranges from one to two years). Experts have suggested that this may be a behavioral adaption to increase survival rates during times of scarcity. Weather oscillations are frequent on the islands, the most famous being El Niño. Nevertheless, the result of this is a significantly low reproduction rate. Females primarily give birth to one pup only, and are rarely able to care for two at once. Thus, if they give birth to two pups or a second one while nursing, the second born is likely to die from starvation or siblicide.

The Galapagos fur seal is a nocturnal hunter, a behavior that would be quite natural if it were not for its reaction to the lunar cycle. Its feeding habits are closely linked to the phase of the lunar month, and researchers have found that they feed significantly less during the full moon, even nursing females. While their fishing trips may last between 50 to 70 hours during a new moon, they can be as short as 10 to 20 hours during the full moon. This may be a technique to avoid being hunted, as they are more visible during a full moon, or may also be due to the fact that their prey (fish or small squid) swim deeper under the ocean surface as they are also more visible. These dives are typically between 10 – 50 meters; however, they can extend up to 100 meters, and females have been known to reach depths of up to 169 meters.

Where to spot Galapagos Fur Seals

There are a variety of locations to observe fur seals in their natural habitats in the Galapagos, depending on your interests. The only visitor site where tourists can walk along the coast where fur seals live is at Puerto Egas on  Santiago Island. On the other hand, visitors can snorkel with fur seals in the northern waters around Genovesa Islands. The fur seal also has a deep-water feeding habitat close to the sheer cliffs by Prince Philip Steps. Consult your naturalist to determine the best route for you to see this bear-faced fur seal.