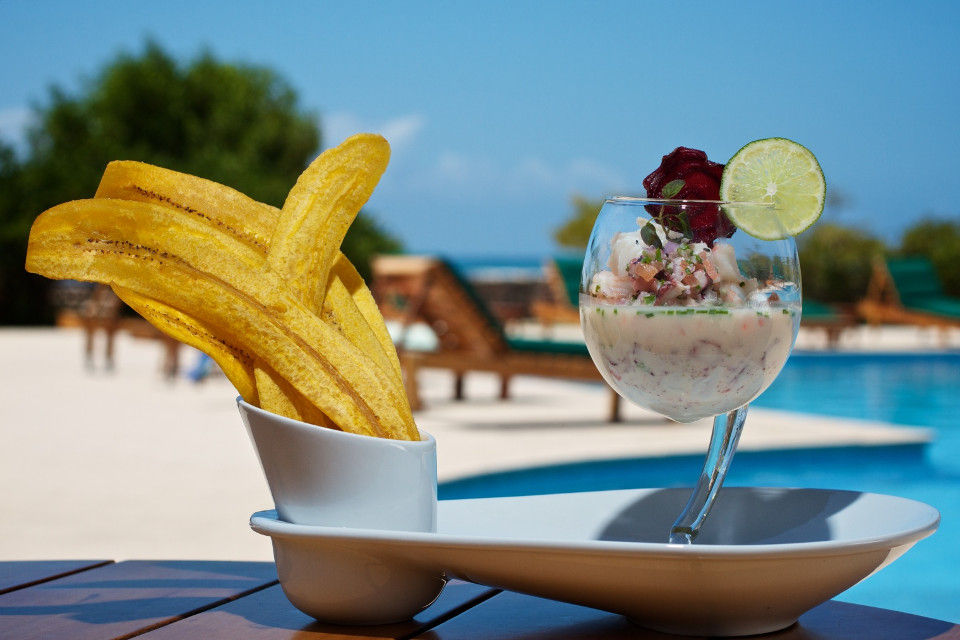 While the Galapagos Islands are a magical world unto themselves, it’s always worth remembering that they belong to the equally wonderful country of Ecuador, filled to the brim with culture, history, and edible delights as well. Ecuador may be a relatively small country in South America, but Ecuador food is as diverse and varied as the geography that comprises this beautiful Andean nation. 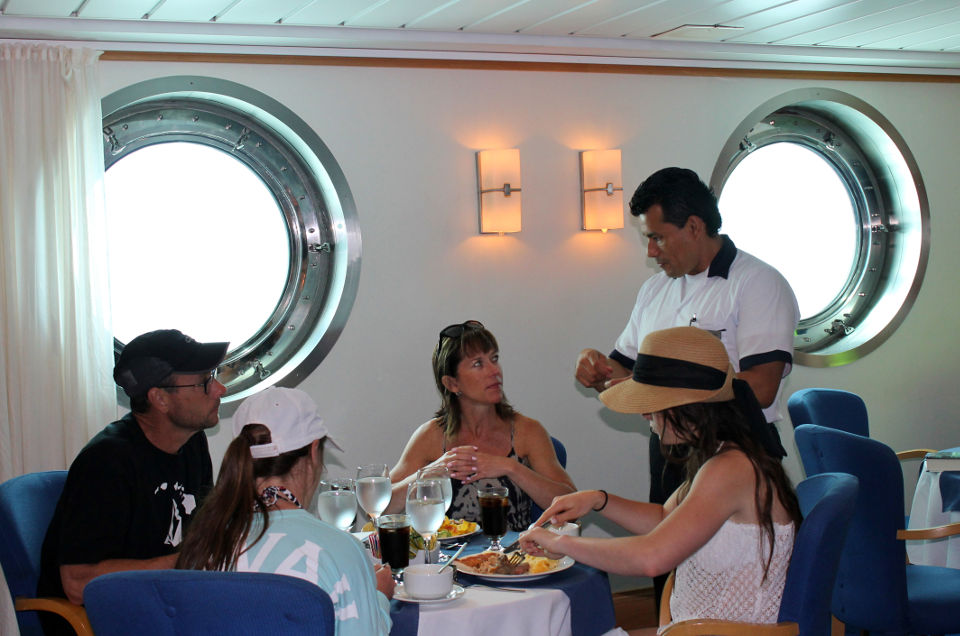 Aboard Yacht La Pinta, it’s often the case that we’ll offer our guests at least one culinary option that explores Ecuador food, so rest assured that if you’re coming to Galapagos, you’ll get to experience a bit of gastronomic goodness from the mainland!

Discover the delicious flavors of Ecuadorian food while exploring the Galapagos Islands!

Ecuador Food in the Highlands

The main staples of the highlands along the Andes are rice, potatoes, corn (choclo), and meat (chicken, beef, pork, and lamb). Almost all meals in Ecuador (mostly the almuerzo or lunch) are preceded by a starter or appetizer that comes in the form of a soup. No bit of Ecuador food is complete without aji, or Ecuadorian hot sauce, which is without a doubt one of the most traditional condiments that you’ll want to try with your meals.

This slow-cooked pork, either in the oven or over a fire, is what many Ecuadorians serve at large events. In many cases, you’ll see it being cut and served straight from the pig itself (somewhat similar to a turkey during Thanksgiving, except way bigger). It’s often sold at many of the larger markets found throughout Ecuador.

This is hornado on steroids, as this bit of pork is actually fried and cooked in its own fat along with several different spices. It is always served with llapingachos (more on these below), potatoes, mote (boiled corn, also known as white hominy), and pickled onions and tomato. A fried slice of plantain accompanies the plate to give it a sweet touch.

If you like potatoes, you are going to love llapingachos! This recipe consists of mashed potato that’s shaped into a patty and then fried. They are filled with fresh cheese (which ends up melting perfectly when fried) is a popular side dish in the Ecuadorian highlands. It’s usually served alongside hornado and fritada, but it can also be eaten on its own. A tip from a local: throw a fried egg on top of your llapingachos to give it extra-scrumptiousness!

Probably one of the most extraordinary pieces of culinary fare that Ecuador has to offer its visitors is cuy, otherwise known in English as guinea pig. This delicacy is fire-roasted over a spit and is exclusive to the Andean regions of the country. Sometimes, the meat of the guinea pig is chopped up and served in stews. It’s a meal that’s not for the wary, especially given that the feet and head of the guinea pig are part of the meal and remain completely visible. Nevertheless, many find it a tasty bit of something new to try that’s not all that different from chicken.

A hearty and thick potato soup that’s served with slices of fresh farmer’s cheese and avocado wedges. Definitely a must for a cold day in the highlands.

A hearty and wholesome goat stew that is prepared using onions, peppers and occasionally some form of fruit juice that gives it a hint of tartness. The goat meat ends up coming out super tender and juicy.

Nothing reminds Ecuadorians that holy week is coming up than the incredibly complex and thick, creamy soup that is fanesca. As this historic and religious holiday appears on  the horizon, numerous restaurants, cafeterias, and households begin preparing fanesca as a seasonal dish, sometimes even months in advance. 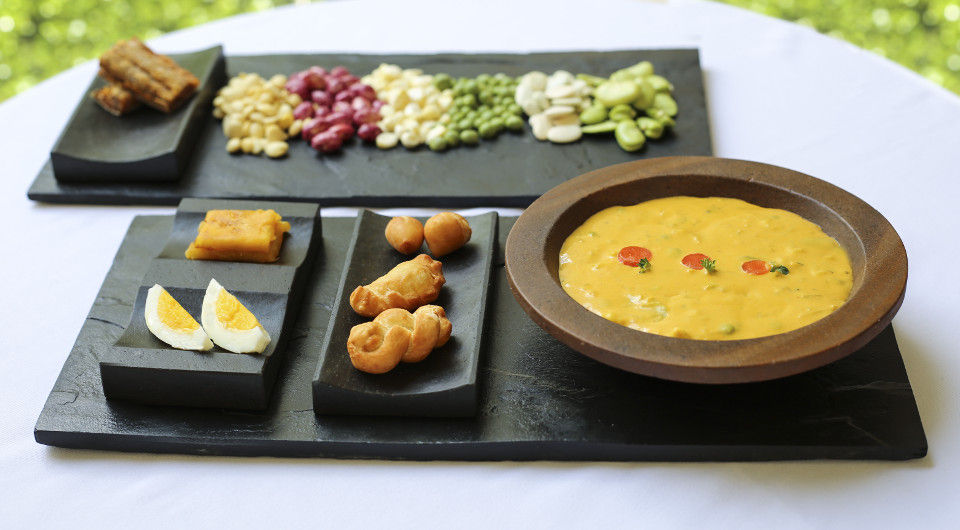 What makes it so special? a.) How rare it’s served and b.) how sophisticated and filling the dish is with its highly symbolic 12 beans and grains (representing the apostles), salty cod (representing Jesus Christ), and numerous other ingredients. Interested in finding out more about this special meal?

This popular dish rolls all the big food groups into one tasty, wholesome meal. You’ll find churrasco served with a not one but two proteins in the form of finely sliced grilled steak topped and a fried egg; alongside two carbohydrates that are rice and french fries. Hungry still? The plate is also served with your fair share of greens that are sliced avocado, a small salad and optional aji sauce to give it that extra and monumental Ecuadorian “kick” if need be. Warning: You may have zero to little room for dessert after you’re done with this bit of typical Ecuador food.

Ecuador Food on the Coast

The Ecuadorian coast is teeming with a variety of seafood to feast on, be it sea bass, trout, shrimp, lobster, prawns, and much more. Keep in mind that there are seasonal vedas that go into effect, which means that certain types of seafood are temporarily banned from being caught and sold – all to help sustain the fragile ecosystems and populations of these creatures.

Ceviche is a definite local favorite! Unlike the Peruvian version of ceviche – which is perhaps slightly more famous if only for its distinct preparation method – Ecuadorian ceviche sees its seafood and fish first cooked before being marinated and then served in lemon juice, tomatoes, onions, and coriander. 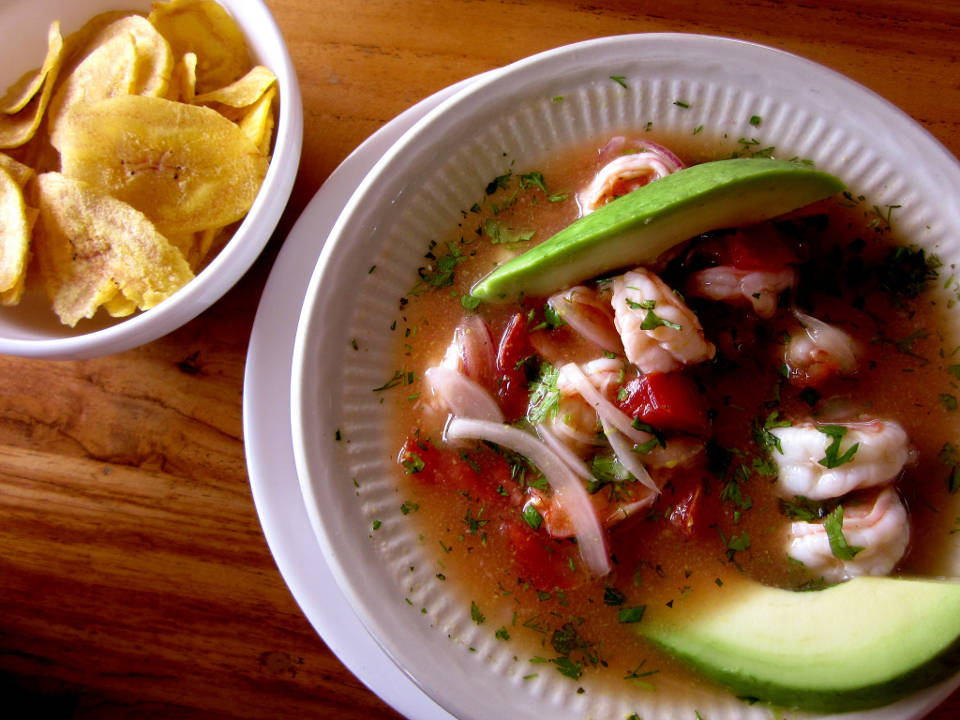 Ceviche is a traditional dish from the coastal region of Ecuador. Photo by: mariaflorine via Flickr

Even though the dish originated down on the coast of Ecuador, it’s such a popular dish all over the country that you’ll find it be served at almost every restaurant that offers typical Ecuadorian food. Common side dishes for Ecuadorian ceviche include popcorn in the highlands and fried green plantain chips when down on the coast. Head’s up this dish is served cold and eaten with a spoon!

This inexpensive soup is an Ecuadorian staple for many. You’ll rarely find an Ecuadorian that doesn’t live by the fact that it may very well be the secret cure to all hangovers too, alongside ceviche. Its protein comes in the form of fresh fish, that’s still relatively firm and that’s cut into chunks. Said fish will often either be tuna or albacore. Sauteed onions are thrown in to give this dish its unique and distinct flavor that mildly tastes like an onion soup that’s merged with tomato soup, along with strong hints of seafood. A bit of tartness in the form of lemons that are served alongside the soup gives that seafood flavor a good old, lemony kick.

Bolon de verde is an Ecuadorian classic that’s originally from the coast but has made its way up to the highlands thanks to its popularity. It consists of mashed green plantain that’s been rolled-up into the shape of a sphere that’s the size of a baseball. Said ball of mashed plantain is stuffed with either cheese and/or meat (usual pork) that’s deep-fried, or sometimes just pan-fried. It is ridiculously filling and should always be topped with a generous serving of Ecuadorian aji sauce.

This recipe is a typical treat from the coastal province of Esmeraldas and becomes an instant favorite for anyone that tries it. Feel the delicious flavors of either fish, shrimp, or squid – or maybe even a combination of all of these – after being cooked in rich coconut milk, peppers, onion, and garlic. This dish is served with a heap of steaming, white rice, and patacones (thick, fried green plantain slices).

Due to the fact that the Galapagos is populated entirely by people from the mainland, it’s no surprise that much of the culinary fare found in the inhabited areas of the archipelago are not all that different from the mainland. However, certain and creative efforts, like at Finch Bay Hotel, are underway to create a “Galapagos culinary identity“.