The Evolution of the Heart: A Marriage Proposal at Sea

Prehistoric-looking creatures, raw volcanic earth spewing plumes of hot smoke, and blazing sunsets raging overhead. There’s something about the enchanted isles that brings us closer to the root of our existence on this beautiful planet. Theories abound for how evolution got us here, for why certain species tend to have monogamous pairing while others mysteriously choose to die alone. But like humans, the question always lingers: how would we have gotten to where we are today, if not for our relationships with one another?

A visit to the Galapagos is a constant reminder and examination of the forces of life at work and the way in which these tend to interact and coincide. Sometimes we are witnesses to this union in more ways than one, not just with the creatures on the islands themselves, but with the humans aboard the Galapagos cruises as well! It just so happens that a few weeks ago, aboard Yacht La Pinta, two guests decided that this was the ideal time and place to publicly commit to “evolving” (spiritually and as people) together!

There’s no better place on Earth for a romantic but adventurous couples’-getaway than the Galapagos Islands!

The More, The Merrier!

On this momentous occasion, most of the guests aboard our cruise ship were Latin-American. The couple in question happened to be two Uruguayans that were traveling with a group of friends from various parts of the world: two Italian men, one Spanish girl, and one Colombian man. The small group had become friends as a result of their vested interest in several hostels which they now owned jointly over in Colombia. Apparently, once a year, this close-knit group of hostel owners would convene and hit the road together.

As a group, they brought a lot of great energy and excitement with them onto La Pinta, with plenty of joking around and positive vibes emanating from their small crew. Little did we know that there was more to the source of this exciting energy than their simply being Latin-American…. because it turns out that a certain someone in the group had something special planned for his partner!

A Marriage Proposal at Sea: The Magical Plan is Afoot!

The Uruguayan bachelorette in question happened to be a big fan of Daddy Yankee (a famous Puerto Rican songwriter and rapper). She was particularly fond of his music video “Andas en mi cabeza” (You’re on my mind) which portrays a montage of scenes depicting couples proposing to each other in different ways. One scene, in particular, shows a bachelor proposing to his partner by holding up a sign asking her if she’ll marry him.

Through careful planning and coordination with the La Pinta crew, the Uruguayan bachelor had us insert this specific clip from the music video right after our daily, post-expedition slideshow. His plan was to enter with his own sign asking her to marry him right as the clip in the music video showed the proposal. 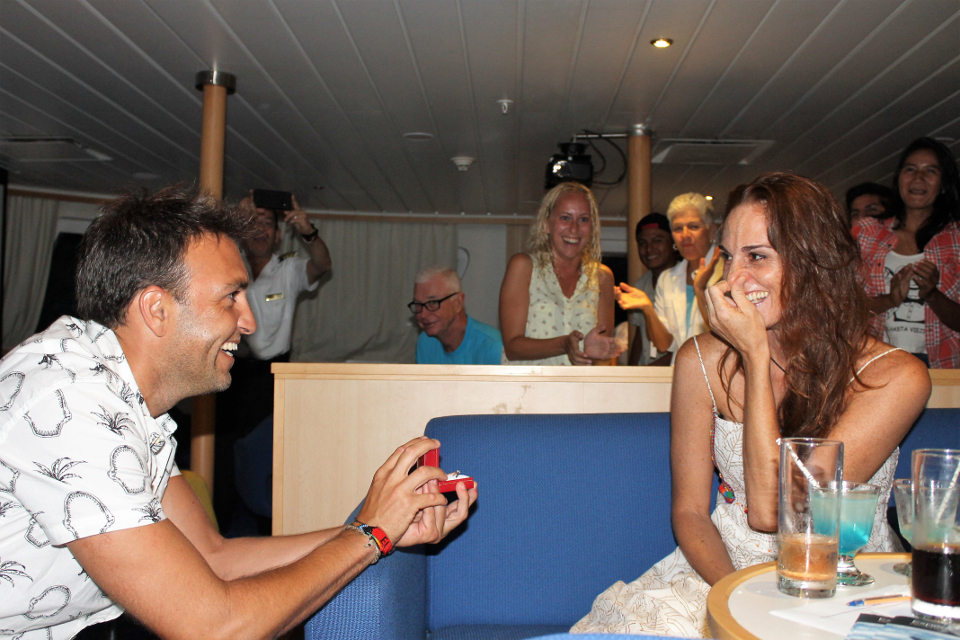 The exact moment he popped the big question!

And everything went according to plan! He came out from behind the projection screen holding up the sign, at which point she immediately connected the dots and started crying tears of joy and surprise. He promptly pulled out the engagement ring and verbally proposed to her, to which she replied yes. The crew threw confetti, music began playing, and everyone present took part in the toast. Their friends, the Captain of La Pinta, and witnesses of the spectacle were all equally awestruck by how charming the whole scene was. It truly was an exciting sight to behold, with even strangers (that had never met the couple before) starting to cry. The group of friends were incredibly grateful for how well the crew of La Pinta had collaborated and helped out with arranging the whole event.

It was an unforgettable experience for all those present and managed to make the enchanted isles even more magical than we could have ever thought. We congratulate the newly engaged couple, and wish them a happy future together!